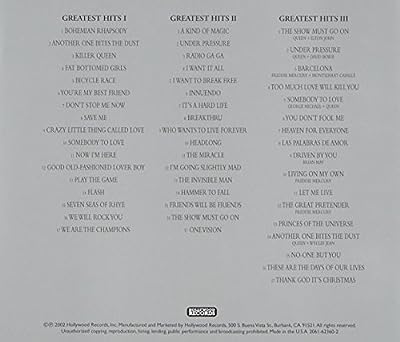 Price: $12.10
As of 2022-11-26 07:05:12 UTC (more info)
Product prices and availability are accurate as of 2022-11-26 07:05:12 UTC and are subject to change. Any price and availability information displayed on http://www.amazon.com/ at the time of purchase will apply to the purchase of this product.
Availability: Not Available - stock arriving soon
Buy Now from Amazon
Product Information (more info)
0 0
CERTAIN CONTENT THAT APPEARS ON THIS SITE COMES FROM AMAZON SERVICES LLC. THIS CONTENT IS PROVIDED 'AS IS' AND IS SUBJECT TO CHANGE OR REMOVAL AT ANY TIME.

The most comprehensive collection of Queen hits ever! Throw in the good price and the 48-page booklet and it's simply "killer." Includes Bohemian Rhapsody; Killer Queen; We Are the Champions; We Will Rock You; Crazy Little Thing Called Love; Another One Bites the Dust; Under Pressure (original and Rah mix); You're My Best Friend; Fat Bottomed Girls , and more. 51 songs!

What once seemed Queen's greatest liabilities--a preening flamboyance and pompous, overwrought theatricality--have ironically become their most enduring charms in a gray, postmodern pop-music landscape. While it eschews the glammy, pre-punk hard rock of live faves like "Stone Cold Crazy" and "Tie Your Mother Down" for the band's more quirky club-beat string of latter-day hits, this 51-track triple-CD anthology goes a long way toward documenting the true dimensions of the band's music and fame. Some songs may not be instantly familiar to American fans because of yet another irony: just as their U.S. fortunes waned during the punk and new wave era, the band was exploding into true international superstars. Thus, there may be a sense of discovery here, whether of latter-day Queen material or solo work by Brian May and Freddie Mercury, whose duet on "Barcelona" with diva Montserrat Caballé transcends boundaries of both time and genre. A previously unreleased live performance of "The Show Must Go On" featuring Elton John on vocals is also included. --Jerry McCulley