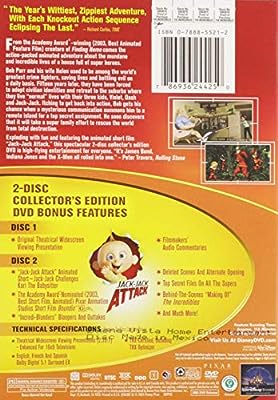 Price: $29.99
As of 2022-05-28 00:18:30 UTC (more info)
Product prices and availability are accurate as of 2022-05-28 00:18:30 UTC and are subject to change. Any price and availability information displayed on http://www.amazon.com/ at the time of purchase will apply to the purchase of this product.
Availability: Not Available - stock arriving soon
Buy Now from Amazon
Product Information (more info)
0 0
CERTAIN CONTENT THAT APPEARS ON THIS SITE COMES FROM AMAZON SERVICES LLC. THIS CONTENT IS PROVIDED 'AS IS' AND IS SUBJECT TO CHANGE OR REMOVAL AT ANY TIME.

From the Academy Award(R) winning (2003 Best Animated Feature Film) creators of FINDING NEMO comes the action-packed animated adventure about the mundane and incredible lives of a house full of superheroes. Bob Parr and his wife Helen used to be among the world's greatest crime fighters, saving lives and battling evil on a daily basis. Fifteen years later, they have been forced to adopt civilian identities and retreat to the suburbs where they live "normal" lives with their three kids, Violet, Dash, and Jack-Jack. Itching to get back into action, Bob gets his chance when a mysterious communication summons him to a remote island for a top secret assignment. He soon discovers that it will take a super family effort to rescue the world from total destruction. Exploding with fun and featuring the animated short film "Jack-Jack Attack," this spectacular 2-disc collector's edition DVD is high-flying entertainment for everyone. "It's James Bond, Indiana Jones, and the X-Men all rolled into one." -- Peter Travers, Rolling Stone

After creating the last great traditionally animated film of the 20th century, The Iron Giant, filmmaker Brad Bird joined top-drawer studio Pixar to create this exciting, completely entertaining computer-animated film. Bird gives us a family of "supers," a brood of five with special powers desperately trying to fit in with the 9-to-5 suburban lifestyle. Of course, in a more innocent world, Bob and Helen Parr were superheroes, Mr. Incredible and Elastigirl. But blasted lawsuits and public disapproval forced them and other supers to go incognito, making it even tougher for their school-age kids, the shy Violet and the aptly named Dash. When a stranger named Mirage (voiced by Elizabeth Pena) secretly recruits Bob for a potential mission, the old glory days spin in his head, even if his body is a bit too plump for his old super suit.

Bird has his cake and eats it, too. He and the Pixar wizards send up superhero and James Bond movies while delivering a thrilling, supercool action movie that rivals Spider-Man 2 for 2004's best onscreen thrills. While it's just as funny as the previous Pixar films, The Incredibles has a far wider-ranging emotional palette (it's Pixar's first PG film). Bird takes several jabs, including some juicy commentary on domestic life ("It's not graduation, he's moving from the fourth to fifth grade!").

The animated Parrs look and act a bit like the actors portraying them, Craig T. Nelson and Holly Hunter. Samuel L. Jackson and Jason Lee also have a grand old time as, respectively, superhero Frozone and bad guy Syndrome. Nearly stealing the show is Bird himself, voicing the eccentric designer of superhero outfits ("No capes!"), Edna Mode.

Nominated for four Oscars, The Incredibles won for Best Animated Film and, in an unprecedented win for non-live-action films, Sound Editing.

The Presentation
This two-disc set is (shall we say it?), incredible. The digital-to-digital transfer pops off the screen and the 5.1 Dolby sound will knock the socks off most systems. But like any superhero, it has an Achilles heel. This marks the first Pixar release that doesn't include both the widescreen and full-screen versions in the same DVD set, which was a great bargaining chip for those cinephiles who still want a full-frame presentation for other family members. With a 2.39:1 widescreen ratio (that's big black bars, folks, à la Dr. Zhivago), a few more viewers may decide to go with the full-frame presentation. Fortunately, Pixar reformats their full-frame presentation so the action remains in frame.

The Extras
The most-repeated segments will be the two animated shorts. Newly created for this DVD is the hilarious "Jack-Jack Attack," filling the gap in the film during which the Parr baby is left with the talkative babysitter, Kari. "Boundin'," which played in front of the film theatrically, was created by Pixar character designer Bud Luckey. This easygoing take on a dancing sheep gets better with multiple viewings (be sure to watch the featurette on the short).

Brad Bird still sounds like a bit of an outsider in his commentary track, recorded before the movie opened. Pixar captain John Lasseter brought him in to shake things up, to make sure the wildly successful studio would not get complacent. And while Bird is certainly likable, he does not exude Lasseter's teddy-bear persona. As one animator states, "He's like strong coffee; I happen to like strong coffee." Besides a resilient stance to be the best, Bird threw in an amazing number of challenges, most of which go unnoticed unless you delve into the 70 minutes of making-of features plus two commentary tracks (Bird with producer John Walker, the other from a dozen animators). We hear about the numerous sets, why you go to "the Spaniards" if you're dealing with animation physics, costume problems (there's a reason why previous Pixar films dealt with single- or uncostumed characters), and horror stories about all that animated hair. Bird's commentary throws out too many names of the animators even after he warns himself not to do so, but it's a lively enough time. The animator commentary is of greatest interest to those interested in the occupation.

There is a 30-minute segment on deleted scenes with temporary vocals and crude drawings, including a new opening (thankfully dropped). The "secret files" contain a "lost" animated short from the superheroes' glory days. This fake cartoon (Frozone and Mr. Incredible are teamed with a pink bunny) wears thin, but play it with the commentary track by the two superheroes and it's another sharp comedy sketch. There are also NSA "files" on the other superheroes alluded to in the film with dossiers and curiously fun sound bits. "Vowellet" is the only footage about the well-known cast (there aren't even any obligatory shots of the cast recording their lines). Author/cast member Sarah Vowell (NPR's This American Life) talks about her first foray into movie voice-overs--daughter Violet--and the unlikelihood of her being a superhero. The feature is unlike anything we've seen on a Disney or Pixar DVD extra, but who else would consider Abe Lincoln an action figure? --Doug Thomas