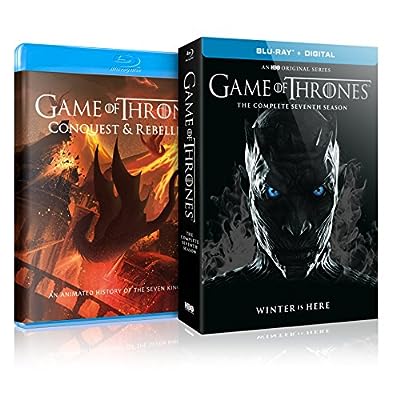 Price: $74.99
As of 2022-06-25 11:32:03 UTC (more info)
Product prices and availability are accurate as of 2022-06-25 11:32:03 UTC and are subject to change. Any price and availability information displayed on http://www.amazon.com/ at the time of purchase will apply to the purchase of this product.
Availability: Not Available - stock arriving soon
Buy Now from Amazon
Product Information (more info)
0 0
CERTAIN CONTENT THAT APPEARS ON THIS SITE COMES FROM AMAZON SERVICES LLC. THIS CONTENT IS PROVIDED 'AS IS' AND IS SUBJECT TO CHANGE OR REMOVAL AT ANY TIME.

From Imagination to Reality: Inside the Art Department

Extensive two-part featurette detailing the astonishing work of Production Designer Deborah Riley and her Art Department, dissecting the process behind the creation of this season s incredible new sets, including Dragonstone, Casterly Rock, Highgarden, the Dragonpit, and more.

Revisit this season s most pivotal moments with this behind-the-scenes featurette, including interviews with key cast and crew breaking down how fans favorite moments were created.

7 new animated pieces that give the history and background of notable season 7 locations and storylines including The Dragonpit, Highgarden, Prophecies of the Known World, the Rains of Castamere and more all narrated by cast members including Nikolaj Coster-Waldau, Aidan Gillen, Iain Glen and more.